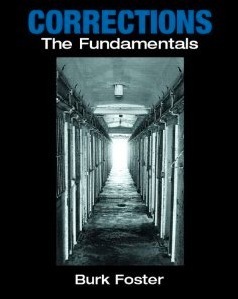 The steel prison door slides shut behind you. The sound is more a solid metallic click than the old-fashioned heavy clang you had expected. This is your cell in the state's newest maximum security prison. You look around the space that will be your home for the next few years. You hold your arms out to the side--you can touch both walls. Six feet across, maybe nine feet deep, appearing to be poured out of some hi-tech metal alloy that gives off a dull gray shine under the recessed fluorescent lighting. Two wall-mounted bunk beds on the left, with two metal footlockers underneath the bottom bunk. Opposite are two metal desks, also attached to the wall, with three shelves above and a molded metal chair pushed underneath. In the back left corner are two metal cabinets. Probably the closets, you think. In the middle of the back wall is a shiny metallic sink with a metal mirror above it. The toilet sets in the open in the right rear corner of the cell. Privacy was apparently not an issue in the design of this cell: bathroom functions are to be performed within three feet of whoever would be working at the rear desk.

The cell is cold and appears to be indestructible--a stainless steel cocoon in which the Terminator would feel right at home. Well, you think, it can't get any worse than this. The door clicks open behind you. A huge figure stands in the doorway. My God, you think, it is the Terminator. He is over six feet tall and must weigh at least 300 pounds. He has to turn sideways to get through the door. His head is shaved. His eyes are, well, beady under a jutting brow. He has tattoos that run up both arms. He looks you over without smiling before he speaks. "You're the new fish? I'm Bubba, your cellie. Do what I say and we'll get along just fine. Don't mess with my stuff. Cross me and there'll be trouble. I hope you like to play dominoes. Can we get along?" You nod, grateful that his accent is Southern and not Teutonic, and he lies down on the bottom bunk. You turn to look out through the bars at the concrete wall ten feet away. You feel many things, but mostly what you feel is helpless, like a character in a science fiction novel you started but never finished in a high school English class. The title was Stranger in a Strange Land. You wonder how it turned out.

Bubba has fallen asleep on his bunk. He is snoring, and then he farts softly, and sighs, like he is in a happy place. The cell smells of stale sweat and smoke. You would like to climb up on the top bunk to rest also, but you are not certain about the risk of waking up Bubba. So you sit down in a chair and stare out through the bars. You think about your past, particularly the fistfight you had with the deputy sheriff in jail--what was it about, how long you'd been talking on the phone?--that got you classified as maximum custody and put you in this cell with your new pal Bubba. I wish I hadn't messed up on probation, you think, I wish I was in a dorm. I don't really belong in prison, yet here I am. You try not to think about the future.

Welcome to prison, or to the middle-class American's worst nightmare of imprisonment--life in a cell with a roommate like Bubba. The views of most Americans about the experience of imprisonment--"doing time"--probably run to extremes. On the one hand, you have prison life as depicted in The Shawshank Redemption. Captain Hadley, the warden's sadistic, foul-mouthed enforcer, inflicts a severe beating on a new inmate known only as "Fat Ass," whose offense was complaining that he did not belong in prison. Fat Ass dies untreated in the prison hospital; no one knows his name, or even seems to care. The hero, Andy Dufresne, is harassed, beaten, and raped by a gang of predatory homosexuals known as "the Sisters." The prison administration is corrupt and completely arbitrary. Both guards and other inmates hold life and death power over the prisoners like Andy and his best friend, Red Redding. Prisoners struggle to hold on to hope and humanity in a world where terrible things can happen to anyone at any time. This is the view of prisons as they used to be.

The modern contrasting view is that of the "country club prison," a sort of prison resort where white-collar criminals and politicians--and maybe gangsters and other rich and lucky inmates--do easy time. The prisoners do pretty much what they want. Their rooms are private and nicely furnished. The staff is there to serve their needs. In the absence of work, all forms of recreation abound. Prisoners play tennis, swim, play a round or two of golf, and then retire with their spouses or girl friends to the prison motel for conjugal visits. They cannot leave, of course, except for the frequent furloughs they are allowed to go to town, but all in all life in the country club prison is comfortable.

Two views of prison life; which one is more real today? The Big House view of prison life on which Shawshank is based is surely more realistic, particularly for its time, 1947 to 1966, than the country club view ever has been. Indeed, in prison circles, the country club prison is often compared to the Loch Ness monster--a creature that is the object of much speculation and controversy, but which no one can establish has ever really existed. Prisons have always come much closer to the sense of dread and terror implicit in the Big House than to the notion of comfort and relaxation associated with the country club prison.